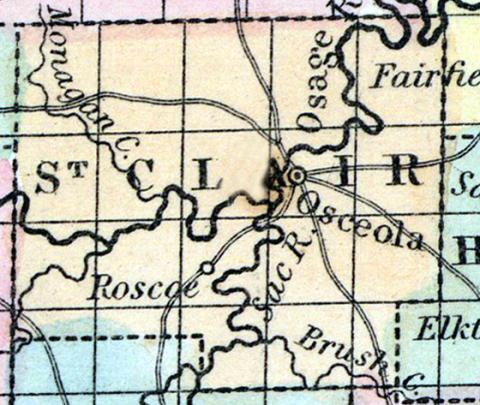 ST. CLAIR, a county in the W. S. W. part of Missouri, has an area of about 650 square miles. It is intersected by the Osage river, and also drained by Sac river, and by Warblow, Peshaw, and Monaghan creeks. The surface is somewhat diversified, and consists partly of prairies, and partly of timbered land: the soil produces Indian corn, wheat, oats, and hay. In 1850 there were raised 126,615 bushels of corn; 13,208 of wheat; 56,282 of oats, and 638 tons of hay. It contained 4 churches, 1 newspaper office; 120 pupils attending public schools, and 80 attending an academy. Capital, Osceola. Population, 3556; of whom 3108 were free, and 448, slaves.  (Baldwin's New and Complete Gazetteer of the United States..., 1854)

ST. CLAIR COUNTY.  This county is situated in the west-southwest part of the State, separated from the Kansas State line by Vernon and Bates Counties. In 1850—the first census taken—showed a population of 3556, which had increased to 6256 in 1860.
Physical Features.—The face of the country is undulating—neither level nor broken. There is from one-quarter to one-third timber—the remainder prairie. The timber consists of hickory, oaks, walnut, linn, etc. The prairies lie principally in the northern part of the county, while the southern—south of the Osage River—is timbered, and more broken. The southern portion is also well watered, by the numerous tributaries of the Osage River, some of which afford excellent water-power.
Soil and Productions.—The soil is generally very fertile, and well adapted to all farming purposes. Some farms have yielded of hemp 700 pounds to the acre; tobacco 1600; flax 2000 in the straw; wheat 35 bushels; corn 75 bushels; rye 40; oats 45; barley 30; potatoes 250; onions, beets, and carrots, each 300; timothy 8000; clover 2000 lbs.; Hungarian grass 8000 lbs. to the acre, etc. This county is well adapted to stock growing, as all kinds of grasses grow finely. Woolen manufactories, tanneries, saw and grist mills, will do well here. This is one of the counties that was almost depopulated by the war, and it is now "open for settlement." Farms can be purchased at reasonable figures, and there is room for all classes of business.
Minerals.—Both iron and coal have been found in this county, but neither worked to any extent. There is without doubt a thick strata of coal underlying most of the county, sufficient to supply all demands for fuel, for centuries to come. In the spring of 1865 there were 10,000 acres of land subject to entry, at $1.25 per acre, or to settlement under the Homestead law.
Since the close of the war this and adjoining counties have received an immense influx of population — principally energetic intelligent people from the Eastern and Northern States, and many towns, almost destroyed during the war, are now in better condition than ever before.  (Parker's Missouri as it is in 1867..., 1867)