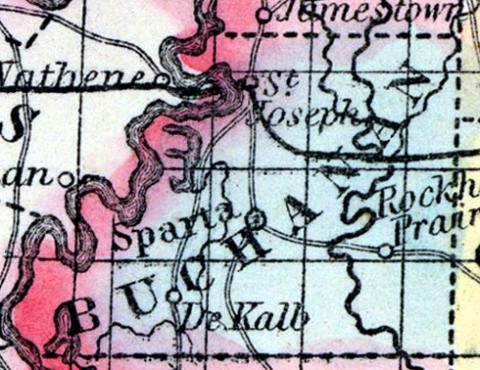 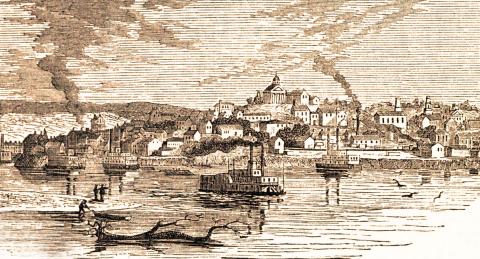 ST. JOSEPH  The county seat of Buchanan county, and business emporium of North-western Missouri, North-eastern Kansas, Southeastern Nebraska, and South-western Iowa—is situate on the great Eastern bend of the Missouri river, about 666 miles above St. Louis. The surrounding country is one of unsurpassed richness and beauty. The site of the city, marked by great boldness, is on the spurs of a series of hills which terminate in the river at this point. The city is thus built on the amphitheatre of hills, facing the south-west-, with a rich alluvial bottom, extending — crescent shaped — several miles along the river at their base. Between the different spurs are small valleys, drained by streams running from the north-east, and bridged on the lines of the principal streets. The levee extends along the base of the hills; and the principal landings—three in number— are where the six principal streets, running at right angles, form their most western angles. At these points there is about thirty feet of water in the channel at low water.
The original settler and proprietor of St. Joseph, Jos. Robidoux, sr., is now living. This gentleman first visited the site of the present city in the last year of the last century. His connection with the American Fur Company led him to locate here in 1803. For thirty-three years he remained as a trader among the savages upon their own soil. In 1336, by the “Platte Purchase," the title to the land passed from the Iowa Sac and Fox Indians to the United States government; and, in 1843, Mr. Robidoux became the proprietor of the site of the city, and proceeded to lay out the “Original Town” of the present map. At first the new town was nothing more than a trading post, and lots were procured for a mere trifle. The richness of the country, however, attracted immigration. and in 1845 a town charter was granted by the Legislature. In 1846 St. Joseph was created the seat of justice of Buchanan county. The growth of the town was for some years gradual. The discovery of gold in California gave fresh impetus to the place. Then it was that the importance of its locality manifested itself, and St. Joseph became the overland starting point of the great tide of emigration to the shores of the Pacific. Her growth by the year 1857 procured for her the charter of a city. Since that period St. Joseph has taken a leading position—-which she retains-among the important points in the center of the American continent.
In 1852 the assessed value of real estate and personal property within the city limits was $784,400; in 1855, $998,126; in 1856, $1,406,439; in 1857, $3,300,315; and in 1868, $3,700,000. The population is not less than 10,000.
The geographical and business position of St. Joseph secured for it at an early day the advantages incidental to the terminus of regular steamboat navigation on the river, and it is now the northern terminus of the navigation of the Lower Missouri. One or more of a regular line of packets arrive and depart every day during the month, connecting at St. Joseph with a semi-weekly line of steamers for the Upper Missouri.
St. Joseph is also the most western point in the United States reached by the great chain of railroads. This connection is made by means of the Hannibal and St. Joseph railroad, which is now open its entire length. The completion of this road has opened a new page in the history of this city. Upon the St. Joseph and Council Bluffs railroad a survey has been made. This road will attract to St. Joseph the trade of the North-West. The St. Joseph and Topeka railroad, calculated to tap the center of the Territory of Kansas, will, from present indications, be the first road constructed west of the Missouri; and the St. Joseph and Atchison railroad, in the south, is nearly completed. A telegraph line has been commenced from Placerville. which is designed to extend to Salt Lake City and thence to Saint Joseph, where it will connect with the eastern lines. At St. Joseph are four steam ferries—two directly across the river to the new city of Elwood, one to a point on the bluffs five miles higher up the river, terminating at Bellemont, and the other to Palermo.
The style of buildings in St. Joseph is good, and more than one-half are of brick. The frame houses are comparatively small, while many of the brick edifices would be a credit to cities of much larger pretensions. Among the buildings of a public character is Odd Fellows‘ Hall. It is of brick, with iron front on the ground floor, three stories high, and covers a space of ground 40 by 130 feet on the corner of Felix and Fifth streets.
The Convent of the Sacred Heart occupies a commanding position in Smith's Addition, on the crest of the hill, three stories high, built of brick, dimensions 64 by 112 feet.
The Court House is on an elevated point near the center, and overlooking the entire city. It is a substantial brick structure of good size.
The St. Joseph Female Seminary is a spacious three story brick building, on the corner of Farron and Third streets, near the Court House.
The foundation of a large Hotel has been laid by a stock company on Francis street, on which the work is now being vigorously prosecuted. Mr. John Patee has completed his large new Hotel, which has been lately opened by Mr. Ogden, formerly of Pittsburg, Pa. The dimensions of this house are 140 by 148 feet, four stories high, with a court yard 60 by 104 feet, and designed to contain 154 rooms. It is located in Patee's Addition.
Thrice the number of buildings—principally brick—erected during any previous year are being put up this season; and gas has been introduced into St. Joseph, which is, in this respect, the pioneer city of the Great West beyond St. Louis.   (Missouri State Gazetteer..., 1860)