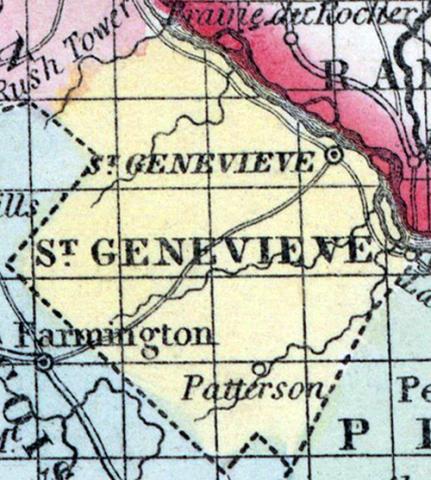 ST. GENEVIEVE, a post-village, capital of St. Genevieve county, Missouri, on the Mississippi river, 61 miles below St. Louis. Some improvement has taken place recently since it became the shipping point for the products of the iron works at Iron mountain. A plank-road, 42 miles long, has been commenced between these works and the town. St. Genevieve exports large quantities of copper, lead, limestone, and white sand, the last of which is used in the glass works of Boston and Pittsburg, and is a very superior article. Two newspapers are published here. Settled about 1755. Population, about 1500. (Baldwin & Thomas, A New and Complete Gazetteer of the United States ... 1854)

ST. GENEVIEVE, The county seat of St. Genevieve county, on the west bank of the Mississippi, opposite the island of St. Genevieve, 72 miles below St. Louis, and 117 miles east south-east of Jefferson City.  It is finely situated and is healthy.  It has considerable trade, particularly in lead, large quantities of which, as well as iron and copper, exist in the neighborhood.  The village is built on Gabourie Creek, a small stream which, at certain seasons, is navigable for a few miles.  It has one or two newspaper offices, a Catholic church and academy.  Population 800. (The Missouri State Gazetteer and Business Directory, 1860)