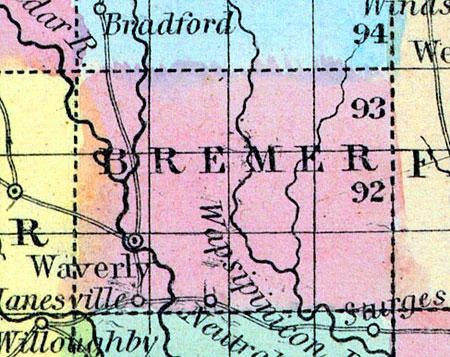 WAVERLY.—This is an incorporated town, and is located in the southwest corner township of Bremer county, and is the present terminus of the Cedar Falls & Minnesota Railroad, which furnishes ample means for transporting the rich products of the Cedar valley to market, and returning in their stead the many articles of comfort and convenience demanded by the wants of the rapidly increasing population of northern Iowa. It is one hundred and fifteen miles from DuBuque, in a little north of westerly direction. The town is finely located on both sides of the Cedar River, just at the edge of the Big Woods.
The first settlement in what is now Waverly, was made by Frederick Cretzmyre, but the original town plat was purchased and first settled by Hon. W. P. Harmon, who was sole proprietor, and by his energy and liberality, contributed more than any other man to make Waverly what it now is. (He died Dec. 8, 1864) Mr. Harmon was accompanied, by B. J. Ellsworth, who was the first justice of the peace in town. Soon after James Null, Nathaniel Henderson, W. B. Hamilton, (afterwards for eight years treasurer of the county,) and Porter W. Earl, who was the first post-master, came here and settled. The first white child born in town was William Waverly Null; he has been in the Union army, and now resides at Cedar Falls, Iowa. The first death was that of Mrs. Cretzmyre.
The county seat was located here in June, 1853, and the county was organized in August of the same year. Waverly was laid out the same fall, and at that time contained two houses and a saw-mill. Since that time it has been constantly improving with a slow and healthy growth, and at this date (1865) contains 2,000 inhabitants.
Among the business establishments are two large hardware stores, three wholesale and retail grocery stores, seven retail groceries, five extensive dry goods stores, two general variety stores, one bonnet and fancy goods store, two clothing stores, two boot and shoe stores, two harness and leather stores, two drug stores, two jewelry stores and three agricultural implement stores. A good flouring mill, with three run of burrs, three sawmills, with siding and lath mills and planing machine attached, one shingle manufactory, one woolen factory and carding machine, two chair and furniture manufactories, one gunsmith, one foundry, one carriage manufactory and two tin shops, comprise the principal manufactories of the town.
The Methodists, Baptists, Congregationalists, Presbyterians, Episcopalians and Catholics, have all flourishing church organizations, and comfortable houses for their meetings. The Court House is a fine brick structure, and cost $25,000. Two large school houses afford good opportunities for a common education, while one or two schools, of a higher grade, furnish facilities for those who wish to pursue the higher branches. Tyrrell Lodge, No. 116, and Jethro Chapter, No. 24, (both Masonic,) and the Good Templar Lodge, “Pride of the West,” No. 137, are all in a flourishing condition. Two brick yards, three lime kilns and five stone quarries, furnish ample material for building purposes.
The Bremer County Phoenix, Maynard & Halbert, editors and proprietors, newspaper and job office, is the only printing office in the county. The Phoenix is a seven column paper, and is issued on Thursday of each week.
Waverly has a fine location, in the midst of a good agricultural country, well watered and timbered, and remarkable for its healthfulness, and settled by an intelligent and industrious people. With superior natural advantages, and an energetic and enterprising population, the advent of the iron horse is developing many heretofore latent resources, and Waverly will soon take and maintain her position among the first inland towns in the State.  (Hair's Iowa State Gazetteer..., 1865)