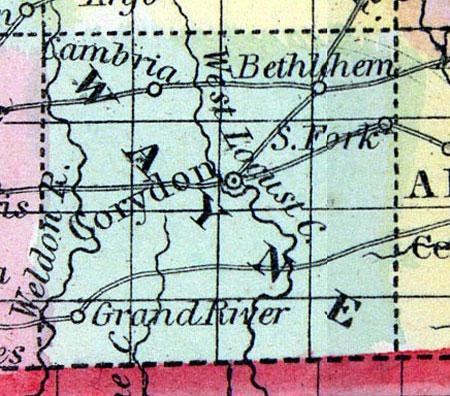 WAYNE, a county in the S. part of Iowa, bordering on Missouri, has an area of 500 square miles. It is drained by the S. fork of Chariton river, and by the sources of Medicine and Locust creeks, which flow southward. This county is said to be fertile and well watered, but deficient in timber. Indian corn, oats, and butter are the staples. In 1850, it produced 14,415 bushels of corn; 3126 of oats, and 2940 pounds of butter. The S. fork of the Chariton affords motive-power for mills. Organized about the year 1850. Capital, Springfield. Population, 340.  (Baldwin's New and Complete Gazetteer of the United States..., 1854)

WAYNE COUNTY Was organized in 1851, — the first settlements were made in 1848. Corydon, the county-seat, was located in 1852. This section is very sparsely settled, there being but about 500 voters in the county, and less than 100 citizens in Corydon. Several churches are scattered over the county : Presbyterian, Methodist, Baptist, and Campbellite denominations — two of them Methodist — making a total of five. The county is well supplied with schools. No newspapers. With an abundance of excellent water-power, Wayne County invites machinists, capitalists, and manufacturers. No machinery in the county. Timber is not so plenty as in some other counties, but the quality of the land is second to none. Considerable land unentered.  (Parker's Iowa as it is in 1855..., 1855)

WAYNE COUNTY  Was organized February 13th, 1851. In August of that year an election was held, which resulted in the election of Isaac McCarty, Sheriff, Seth Anderson, County Judge, D, Payton, Treasurer and Recorder, and Thos. McPherson Clerk. Total revenue for first year, $64,30. Total number of voters at date of organization, thirty.
This county is situated in the southern central part of the State, bounded by Lucas County on the north, Appanoose County on the east, and Decatur County on the west, with the State of Missouri for its southern boundary. It is twenty-four miles square, and has sixteen organized townships, viz.: Benton, Clay, Clinton, Corydon, Grand River, Howard, Jackson, Jefferson, Monroe, Richman, South Fork, Union, Washington, Walnut, Warren, and Wright.
The county contained a population of 6,521 in 1863. By the Assessor's books for the year 1864, there were 2,616 horses, 110 mules, 9,857 sheep, 24,912 hogs 9,001 neat cattle, and 39,619 acres of land in cultivation in the county.
Total revenue, as follows, to wit: County $5,567; State $2,784; School $1,419; Road $1,566; School House $3,177; School District $3,588; Contingent $950. Volunteer for the relief of soldier's families, $8,387.
The land is well divided into prairie and timber. The prairies are undulating and finely adapted to agriculture, being rich and fertile. The timber is good, and consists of oak, walnut, hickory, cottonwood, maple, &c. Coal is not very abundant, and yet is found in considerable quantities in the northeast part of the county, and there is a bank now being worked within six miles of Corydon, the county seat, which promises an abundant yield. No doubt, when proper examinations are made, and mines well worked, there will be a great abundance for all practical purposes at a cost of from twelve and a half to eighteen cents per bushel. The county is well watered by the Chariton running through the north and east, and Medicine and Grand Rivers and their branches running through the southern portion of the county, with Muddy, Steele Creek, Wild Cat, and other streams of smaller note. The soil is well adapted to the growth of all kinds of grain. Wheat, oats, corn and rye can be raised in abundance. Potatoes, onions, carrots, and in fact all kinds of vegetables grow abundantly when properly cultivated. Fruit will do well here if properly cared for while young; at least this is the experience of the oldest and best farmers of this county, who attribute the small quantity of fruit to the general neglect of this branch of agriculture. Stone is not very abundant, and is only found in quantities in South Fork township, in the eastern part of the county. It is very good limestone. Good brick is made in nearly every part of the county, and especially along any of the streams where there are found oak lands. Good mill seats can be found along almost any of the streams. There are a number of saw mills in the county. A good flouring mill would doubtless pay well, as many farmers have to go at least twenty-five miles to reach their mills. Also a good woolen factory would certainly be a paying institution as the farmers becoming possessed with the “sheep mania,” have, within the last two years, stocked their farms with sheep, so that to-day our county will compare favorably with any county in the State of Ohio in this respect. The State Line Railroad, to be built on or near the line between this State and Missouri, it is anticipated will pass through the southern part of the county. The earliest settlement in the county was made by H. B. Duncan, near Lineville, in the southwest corner of the county, where he opened a large farm. He supposed when he settled there that he was settling in Missouri, and was Commissioner of the county of Putnam, and afterwards County Judge, and subsequently Representative to the Legislature of Missouri from that county. But when the line was drawn between Iowa and Missouri he found his mistake, and that he was a citizen of Iowa. Upon organizing Wayne County he was elected one of the Commissioners of the county, and afterwards filled several offices of the county, and up to his death, some three years since, was one of Wayne's most esteemed citizens. His settlement was made in the year 1847. Henderson Walker made a settlement in the northeast part of the county in 1848, or was there rather when Benj. Barker moved in and commenced the settlement of what is known as Barker's Mill, on South Chariton River. The earliest settlers besides those already named were Hiram Mason, K. M. Hart, Isaac McCarty,” Joseph Sullivan, Geo. Garman, John Bay, the Duncans, the Nidays and others. The first District Court was held by Judge McKay, and the Grand Jury sat in a slough below Corydon. The wind blowing hard blew the papers away belonging to the only three cases on docket, before trial, and they never were found, consequently court adjourned. The first marriage in the county was that of Amos W. Prather to Polly Ann Wilcox, November 22d, 1852. (Hair's Iowa State Gazetteer..., 1865)