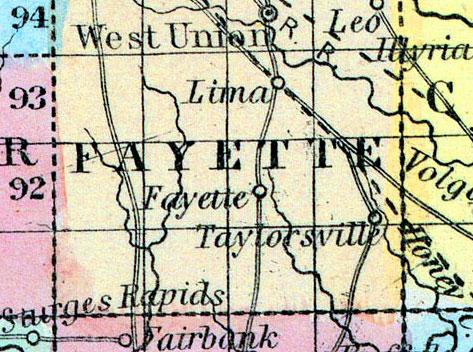 WEST UNION, a thriving post-village, capital of Fayette co., Iowa, 60 miles N. W. from Dubuque, and 40 miles W. from Clayton, the nearest landing on the Mississippi.  (Baldwin's New and Complete Gazetteer of the United States..., 1854)

WEST UNION, the county seat of Fayette county, is located on the northeast quarter of Section 17, Township 94, north of Range 8, west of the 5th Principal Meridian. It was laid out in the autumn of 1849 by William Wells, Jacob Ly Brand, and J. W. Rogers, but was re-surveyed in the spring of 1850, by the County Surveyor of Clayton county, in compliance with the law. The first house on the town plat was built by J. W. Rogers, in the fall of 1849. The second was erected in the fall of 1850, by Daniel Cook. The first post office in the county was established here in 1850, and J. W. Rogers appointed postmaster.
The town is pleasantly situated on a commanding swell of land between two bodies of timber, in a rich and well improved country, affording fine views. It has a good brick Court House standing in the centre of a public square of 400 feet on each side. The population is about 1,500.
There are four churches, one Methodist, one Baptist, one United Brethren, and one Disciple; one graded school with 500 scholars, kept in a good house, one printing press owned by a company, one weekly newspaper, Iowa Public Record, edited by A. J. Felt, five dry goods and general merchandise stores, two hardware stores and tin shops, nine grocery and notion stores, three hotels, three shoemakers, three saddle and harness makers, three wagon shops, one furniture shop, one cooper shop, one pump manufactory, six blacksmith shops, one pottery, three milliner shops, three dressmakers, one jeweler, one steam plow manufactory, two daguerrean and photograph artists, two merchant tailors, nine stone masons and plasterers, one livery stable, four land agents, ten attorneys, and seven physicians.  (Hair's Iowa State Gazetteer..., 1865)