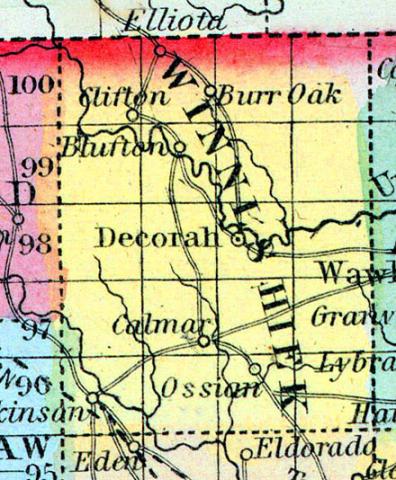 WINNESHEIK, a new county in the N. N. E. part of Iowa, bordering on Minnesota, has an area of about 600 square miles. It is intersected by the Upper Iowa and the North fork of Turkey river, affluents of the Mississippi. This county is represented as well watered and well timbered; the soil is particularly adapted to grazing. Named from a chief of the Winnebago Indians. Capital, Decorah.  (Baldwin's New and Complete Gazetteer of the United States..., 1854)

WINNESHEIK COUNTY   Is bounded on the north by Minnesota, on the east by Alamakee County, on the south by Fayette, and on the west by Chickasaw and Howard Counties. It was occupied by Winnebago Indians until the year 1848, when they were removed by Government. Previous to that time there were no settlers in the county. Fort Atkinson was built about the year 1843, for the protection of the settlements against the incursions of the Indians.
The Old Mission, as it is familiarly called, was formerly a missionary-station, under the patronage of Government. Both the Fort and Mission have been abandoned, and, although in the charge of keepers, are rapidly going to decay. The land about both, comprising 5-1/2 square miles, is still reserved from sale, and is exceedingly fertile.
Among the first settlers may be mentioned Francis Rogers, David Reed, George Ream, William Day, and Wm. Painter. The first settlement was made soon after the removal of the Indians in 1848. The population of the county is estimated at about 5000.
The climate of Winnesheik County resembles that of New York City, although the winters are much shorter, and the autumns very long, mild, and beautiful. The spring generally opens about the 15th of March. The summer is never excessively warm, except where the wind is shut out by the bluffs or timber.
In soil, this county is not excelled. It is a rich black loam, and has a depth of from one to six feet. It has a very slight mixture of sand. Of course, the deepest soil is to be found upon the bottoms. The county is well timbered ; about one-fourth of it is heavily timbered, one-third is prairie, and the balance is burr-oak openings, affording plenty of firewood and rails.
The county is well watered by the Upper Iowa, Turkey, and Canoe Rivers, and numerous smaller streams. The Upper Iowa is a beautiful stream, with rock and gravel bed, good banks, swift current, and pure water. The Turkey River, which runs through the south-west part of the county, is also a beautiful stream. The Canoe, which is a branch of the Iowa River, is a fine stream, somewhat smaller than the other two, but all of them afford abundance of mill-power.
Trout Creek is worthy of note. This stream, which is in size about one-third as large as the Upper Iowa, breaks forth in one large spring from the foot of a perpendicular bluff, about two and a half miles from its mouth. It abounds in speckled trout, and is a favorite resort for sportsmen. It rises about two and a half miles south from Decorah, and empties into the Upper Iowa River two miles south-east from that town, at the southernmost bend of the river.
In general, the surface of the country is gently rolling ; near the large streams it is bluffy, but the high lands are easily accessible by means of the many ravines running in all directions. The prairies are small, well watered, and agreeably diversified with groves and thickets. Washington, Franklin, and Looking-Glass Prairies are noted for their excellent adaptation to farming purposes.
This county cannot be excelled for stock raising. Sheep do remarkably well ; already there are many flocks of fine blooded ones in the county. The prevailing rock is lime-stone, which, near the surface, is soft and shelly, but below it is hard and solid. It is always found in layers of a good thickness for building purposes.
Coal is said to have been found in the western part of the county.
There are a number of religious societies formed in the county, among which are Congregationalists, Presbyterians, Methodists, Quakers, and Lutherans.
There are a number of saw-mills, and, although on a small scale, they do a good business. The Decorah saw-mill has one saw which cuts 3000 feet of lumber in twenty-four hours.
There are also a number of grist-mills in the county, doing a thriving business. Decorah grist-mill has two run of stones, which grind 680 bushels of wheat in twenty-four hours.
Dunning's grist-mill, near Decorah, is situated under a large spring, with fifty feet fall of water.
An extensive plow factory has recently been erected in Decorah.
The manufactories most needed at present are : woollen factories, chair factories, sash and door factories, grist-mills, lath-mills, iron foundries, and factories for the manufacture of agricultural implements. The inducements for their erection are the abundance of water-power and materials, and the great demand for their products.
Farmers are much needed — the inducements for them being plenty of vacant land and excellent markets. Mechanics are very much needed, especially carpenters, masons, millwrights, coopers, saddlers, watchmakers, tinners, cabinet-makers, and painters. The inducements for them are plenty of work and good pay.  (Iowa As It Is in 1855; A Gazetteer for Citizens..., 1855)