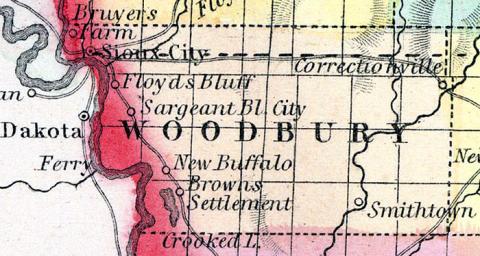 WOODBURY COUNTY   Was organized in 1853, and is in the western tier of counties, and the fourth from the north line of the State. It is bounded on the north by Plymouth County, on the east by Ida, on the south by Monona, and on the west by the State of Nebraska. It is one of the largest counties in the State being twenty-four miles wide and forty miles long. The Little Sioux River passes through the eastern part, its west fork through the central portion. Floyd River flows through the northwestern township, the Maple River through the southeast township, and the Missouri and Big Sioux Rivers form its western boundary. The central portion of the county is rather hilly in some townships, but the fine lands along the rivers and in the northern townships, make it one of the best counties in that part of the State. There is not, however, timber enough to supply the intervening prairies, unless prudently used, over a space of several miles among ridges, and at the heads of timber ravines, extending a mile or two from the Little Sioux. There are frequently seen patches of young oaks of a year's growth, growing as thick as weeds, and some spots that have escaped the annual fires of two or three years, with some spots also of larger growth, where the thinner grass in burning had only injured but not killed the young trees. It is probable that at not a very distant period there was a forest of oak encroached upon by the prairie fires, with the roots still remaining and supporting a dwarf forest which bears acorns, even upon the second and third years growth. If the fires were kept from such tracts the lands would in a few years be covered by a dense forest. Another peculiarity of the Missouri slope is the absence of boulders, but few being seen except along the face of the bluffs of some of the rivers. The drift deposit appears to have been deeper along the Mississippi slope, and hence but little rock is seen in places even where the beds of the streams are a hundred feet below the average level of the prairie. The channels of the streams have probably worn into the rock, but the day, gravel and surface soil have slid over the erosions, until the rock, if once exposed, is now seldom seen. The rivers are generally very crooked, have a strong current, and with banks and beds of clay or alluvium composed of the surface soil. The winding courses of the streams across the wide bottoms, sometimes without timber margins, have the appearance of canals. It is another peculiarity that the soil though so loose does not wash, but in the absence of rain becomes so absorbent as to receive the rain and melted snow without forming rills or brooks of much extent, except when supplied by unfailing springs. Perpendicular banks of streams ten or fifteen feet high, often with trees growing up directly in front of them, are a curiosity, at least to those accustomed to see earth banks of at least 45 degrees of inclination. The timber along the Big Sioux and Missouri is mostly oak among the ravines, and cottonwood on the river bottoms.
The climate of this district is evidently more dry, there is usually less snow, and the annual fall of rain is less than near the Mississippi. This slope may be considered the eastern part of the dry region extending to the foot of the Rocky Mountains, but without that objectionable degree of dryness common to the plains of western Nebraska. It is a country well adapted to stock growing, and especially to sheep. In this respect it is unsurpassed.— Many of the “sloughs” marked on the plats of Government surveys are the best grass lands, and may be driven over with a team at any season of the year. Some of the prairies also marked “second rate,” probably on account of the lighter grass, are now proved to be the best grain lands. The average height of the Little Sioux, Floyd, and Missouri Rivers, above the ocean, is nearly 1,300 feet. The present market advantages of the county are good, being connected with St. Louis by the steamboat trade of the Missouri, as well as with the States of Nebraska and Dakotah.
SIOUX CITY, the county seat, is situated on the Missouri River, two miles below the mouth of the Big Sioux River. It contains six general stores, one hardware store, one drug store, one grocery, and numerous mechanical shops of various kinds. It is to he the terminus of the DuBuque and Sioux City Railroad, and the starting point of one of the branches of the Pacific Railroad. It possesses all the advantages that would be expected in such a fortunate location, and has a population of about 1,000.
SMITHLAND is on the Little Sioux River, thirty miles southeast of Sioux City. It contains a Methodist church, one flour mill, three saw mills, two general stores, and one grocery. The Little Sioux River affords many good mill privileges. Population 125, township 300. WOODBURY is on the Missouri River, and on the stage route from Council Bluffs to Sioux City. It has a Methodist church and one saw mill. Population 100.
The remaining post offices and villages are Correctionville, Linndale, Morris and Oto.    (Hair's Iowa State Gazetteer..., 1865)