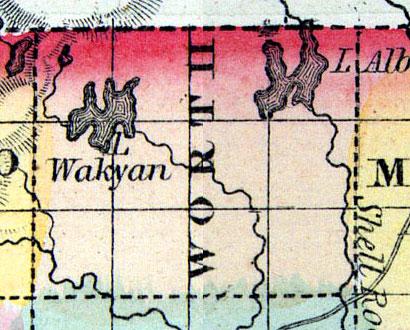 WORTH, a new county in the N. part of Iowa, bordering on Minnesota, has an area of about 430 square miles. It is drained by Lime and Shell Hock creeks, branches of English river, which rise in two small lakes in the northern part of the county. It is not included in the census of 1850. County seat not located.   (Baldwin's New and Complete Gazetteer of the United States..., 1854)

WORTH COUNTY   Is situated in the fifth tier of counties west of the Mississippi River, and is bounded on the north by Minnesota, on the east by Mitchell County, on the south by Cerro Gordo, and on the west by Winnebago.
The principal stream is Shell Rock River, which heads in Minnesota, and flowing in a southeasterly direction, enters the county twelve miles east of the northwest corner, and leaves it five miles west of the southeast corner. It flows through a very fertile country, and affords several good water powers. The banks of the river are rocky, but not in the least bluffy. Elk Creek is a small stream, which heading in the northwest part of the county, empties into Shell Rock River, a little south of the village of Northwood. Deer Creek is in the eastern part of the county, and flowing east, empties into Cedar River, in Mitchell County. Beaver Creek heads in the northwest corner of the county, and empties into Shell Rock River at Northwood.
The general surface of the county is slightly undulating, and consists of about one-eighth timber and the remainder prairie. The timber is principally oak, and much of the timber land is what is called “oak openings.” The soil is good, and well adapted to the cereals suited to the climate. The facilities for stock raising are of the best kind. Building stone is found in abundance on Shell Rock River and Elk Creek, and there is plenty of brick clay, in the different parts of the county.
The only manufactories in operation in the county, are: a water power flour mill and saw mill, at Northwood. There are other good water powers which are unimproved. Manufactories would pay well as it is a good country for sheep, and there are no more good water powers, for about one hundred miles, both north and west.
The county was organized in 1857, and contains seven townships, as follows: Bristol, Brookfield, Fertile, Hartland, Northwood, Silver Lake and Union. The first settlement was made in 1853, by Gulbrand Olesen and Simon Rustad. The population of the county is about 1,200, an increase in two years of 40 per cent.
NORTHWOOD is the county seat, in the northern part of the county, on Shell Rock River, which affords good water power at this place. It has one general store, and one flour and saw mill. Population, 150.
BRISTOL is in a township of the same name, in the western part of the county. It has one Methodist Church, one general store, and one saw mill. Population, 100.
HARTLAND is a post office in a township of the same name, 10 miles northwest of the county seat, on the State line. Population of township, 200.  (Hair's Iowa State Gazetteer..., 1865)