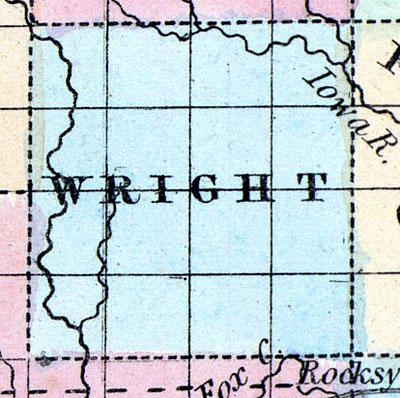 WRIGHT, a new county towards the N. part of Iowa, has an area of 676 square miles. It is intersected in the E. by the Iowa river, and in the W. by Boone river. This county is not included in the census of 18-50. Named in honor of Silas Wright, of New York. County seat not located.  (Baldwin's New and Complete Gazetteer of the United States..., 1854)

WRIGHT COUNTY   Is situated in the third tier of counties from the north, and the sixth from the east line of the State. It is bounded on the north by Hancock, on the east by Franklin, on the south by Hamilton, and on the west by Humboldt and Webster Counties. The Iowa River runs in a southerly direction through the eastern portion of the county, and Boone River through the western. The timber which covers about one-fourth of the county, is mostly on these two streams, and the central portion of the county, is one large, level prairie. Burr oak, black walnut, elm, linn, butternut, hickory, ash and maple are the principal varieties of timber. The soil is a black loam, and well adapted to all kinds of grain. Good brick clay is found in considerable quantities, but building stone is rather scarce.
Wall Lake in the southern part of the county, is surrounded by a wall which has the appearance of having been made by hands, but was in fact formed by natural causes. The county was organized in 1855, and contains eight townships: Boone, Belmont, Eagle, Grove, Iowa, Liberty, Pleasant, Troy and Vernon. The early settlements were made on the Boone and Iowa Rivers. Among the early settlers on the former were: Dr. Crapper, C. H. Martin, H. W. Montgomery, Nelson Usher, M. B. Brossfield, N. B. Paine, S. B. Hemett and Son, and William Striker. On the latter Henry Lunck, A. Dumond, J. W. Elder, L. H. Cutler, Isaac White and Robert Bowen.
GOLDFIELD, a small post village, is the county seat.
BELMOND is situated in the northeast portion of the county, eight miles from the county seat, and thirty miles northwest of Iowa Falls. It contains two churches, Methodist and United Brethren, two general stores, and a flour and saw mill. The Iowa River affords a good water power at this place. The soil is sandy, and well adapted to corn, wheat and oats, and stands the extremes of dry or wet weather, remarkably well. Population of township, 400.
BACK GROVE is in the southwestern portion of the county, about ten miles from the county seat, and fifteen miles northeast of Fort Dodge, on the stage route from Webster City to Luni. It contains one church, Methodist Episcopal. The soil of the township is a black mould, varying from one to four feet in thickness.
The remaining post offices and villages are: Fryeburg, Luni and Montgomery.   (Hair's Iowa State Gazetteer..., 1865)