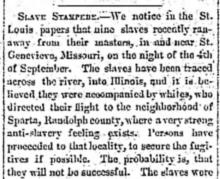 SLAVE STAMPEDE.––We notice in the St. Louis papers that nine slaves recently ran-away from their masters, in and near St. Genevieve, Missouri, on the night of the 4th of September. The slaves have been traced across the river, into Illinois, and it is believed they were accompanied by whites, who directed their flight to the neighborhood of Sparta, Randolph county, where a very strong anti-slavery feeling exists. Persons have proceeded to that locality, to secure the fugitives if possible. The probability is, that they will not be successful. The slaves were young men, ranging from 20 to 30 years of age. A reward of twelve hundred dollars is offered for their arrest.