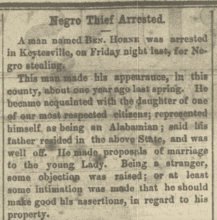 A man named BEN. HORNE was arrested in Keytesville, on Friday night last, for Negro stealing.

This man made his appearance, in this county, about one year ago last spring. He became acquainted with the daughter of one of our most respected citizens; represented himself as an Alabamian; and his father resided in the above State, and aws well off. He made proposals of marriage to the young Lady. Being a stranger, some objection was raised; or at least some intimation was made that he should make good his assertions, in regard to his property.

About the first of September 1854, Horne left this neighborhood, on a visit, as he said, to Alabama. He was absent two months. He returned having in his possession two Negro men; representing that he started from home with four Negroes, two of whom had died on the trip up the Mississippi, with yellow fever.

One month after his return––some time in November, 1854––he was married to the young Lady, before mentioned.

Horne got along finely, for some months. No one suspicioned his true character; though he was known to be a miserable liar. In January, '55, having become indebted to L. Salisbury & Co., of Keytesville, he offered to sell Judge Salisbury one of his Negroes. The bargain was struck at $1,000. All went right till August, when this Negro ran off. Horne did his best to prevent pursuit; stated, he knew, from the character of the Negro, that he would remain in the neighborhood. Judge Salisbury would in all probability taken his advice but for the remonstrance of some of the neighbors.

The Negro was arrested in Shelbyville.––He had stolen a horse and was provided with a pass. He rose day and night––passing through Bloomington, at 10 o'clock, in the day. He was brought back. Horne was exceedingly anxious to know what Judge Salisbury would do with him. He insisted that the Negro might now be trusted, if he was turned loose, he would never run again. The Negro asked a great many times, what was to be done with him. To all of which questions, whether from Horne or the Negro, answer was mads [made] that he was to go to the South. The Negro begged in the most earnest and supplicant manner to be retained by Judge Salisbury. Said he would take a thousand stripes, if that would be any satisfaction; but being sold to the South was too horrible for him to contemplate.––He was told, he would not be whipped, that his tears and entreties were vain; to the South, he was bound to go.

When he found that such was his certain fate, he requested Judge Salisbury to provide pen and paper, and go with him to a private room. It was done. The Negro stated that "Mr. Horne had got him into difficulty and now he would return it upon him. Mr. Horne stole me from a widow woman, named Mrs. Buckner, living in Union Co., Arkansas. He persuaded me to run off, and and [sic] gave me the pass. When he stole me, the agreement was, I should be sold, the money divided between Horne and myself, and he was to see me safe, in a free State. He has failed in his agreement. I wish you to write to them and let them know where they can find me and Horne."

Judge Salisbury wrote to Maj. D.R. Coulter, according to the Negro's directions.

In the mean-time Horne had no idea what was going on. Judge Salisbury got Horne to take the Negro back, cancel the bill of sale and give him the security, for the amount. It was done. Horne then took the Negro to Glasgow, and sold him to Mr. Pew. Mr. Shackelford, who arranged the matter of sale for Mr. Pew, required that Horne's father-in-law, who was a responsible man, should sign the bill of sale––which was done.

It was some two months before Judge Salisbury received an answer from Arkansas. This was owing to his letter being sent to the wrong office. The answer finally came. The Negro had made a correct statement. The letter counseled secrecy and discretion.

Last Friday night, at 12 o'clock, the Sheriff of Union County, made his appearance in Keytesville, with a requisition from the Gov. of Arkansas, which had been sanctioned by Gov. Price, for Horne and the Negro. Some of the citizens went with him to Horne's house. He was called out; a revolver was presented to his head, and he was told he was a prisoner. We are informed Horne was greatly agitated, for a few minutes, though this soon wore off.––Saturday morning the Sheriff started back with him and the Negro. They have a Brass Band in Keytesville, which was called out upon the occasion of Mr. Hornes departure; as he drove off, the Band struck up the "Arkansaw Traveller." Horne waved his hat and told the boys, he would be back sooner than they expected.

The Sheriff stated that Maj. Coulter had offered five hundred dollars reward for Horne. He said Horne had lived in Union Co., some years ago, but had been compelled to leave on account of some violation of law. When he paid his last visit and stole the Negro, he was not recognised by any one. They knew that the Negro was stolen, but did not know that Horne was the thief.––He said the people had become very much incensed since they had learned the facts in the case; that he feared Horne would be subjected to mob-violence on his return.

His wife will remain with her father; and steps are taken to obtain a divorce.

Horne leaves a Negro man, in this county. This Negro will be sold to pay up his debts. We are informed, he has left enough property to pay all his debts, and near about indemnify his father-in-law.