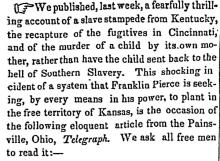 We published, last week, a fearfully thrilling account of a slave stampede from Kentucky, the recapture of the fugitives in Cincinnati, and of the murder of a child by its own mother, rather than have the child sent back to the hell of Southern Slavery. This shocking incident of a system that Franklin Pierce is seeking, by every means in his power, to plant in the free territory of Kansas, is the occasion of the following eloquent article from the Painsville, Ohio, Telegraph. We ask all free men to read it:––

"Give me Liberty! or Give me Death!"

So exclaimed, in the fullness of his great soul, the Patriot-Orator of the Revolution––and all that rightfully may claim manhood, then, and ever since, has cried, "Amen! and Amen!" So felt the Slave Mother in Cincinnati about a week ago last Monday, when the hounds that kennel in the Fugitive Slave Law were upon her, and the Hell of Slavery from which with her little ones she had just escaped, opened its jaws again for their destruction. She knew well that there was no hope in man, and she sought to carry her case tot he tribunal of her Maker. She knew the cruelties and pollutions of Slavery––and she would take the spirits of her little ones while pure and uncontaminated, on the pinions of her own, back to the God from whence they came! One of the dear ones she did Emancipate––and the tyrant master when he clutched for his prey found nought but the lifeless body! Terrible was the emancipation of that little slave––three years only had measured is day––but how immeasurably preferable to a life of Slavery. If an edict could today go forth that at a certain hour every Slave in this land should be murdered––what a thrill of horror it would send through every soul. Yet a thousand times to be preferred would be such an event, horrible indeed, to a ten years' continuance of their enslavement. How much less horror, and despair, and crime. We know of no woman on all the pages of history who had honored her sex with a noble heroism than this poor slave mother, in rescuing her darling child from Slavery by taking its life. And we can conceive of no intenser manifestation of maternal love.

But how horribly infamous and sad the fact that in this 19th century of the era of Jesus Christ, and in this land of boasted civilization and christianity, an institution shall be permitted, so damnable as to drive a mother to such a choice! How soul-sickening that in all Cincinnati, with all its pretensions to civilization; with all its Churches and all its HOMES, there was no arm strong enough for her rescue! How all the good in earth and heaven must weep as they hear the story of this poor slave-mother. This is it:

"She was claimed as a Slave by a man in the chivalric State of Kentucky, residing about 18 miles from Cincinnati. A week ago last Sunday night, she looked around upon her four little ones (doubly dear to her mother heart, as this world furnished nothing else for her love or hope,) she felt in her deepest should that it was her duty to make an effort to rescue those children from the terrible fate impending over them. She communicated her heroic resolution to her husband, "owned" upon a neighboring plantation. Bidding his old father and mother join them in their flight for Freedom, they take their children in their arms and with God only for a friend, fly for the Ohio river. Not as of old, as for other fugitives, did the Almighty open them a dry way through the waters. But he had sent his North wind, and bridge the mighty river, and the slaves passed over! In the humble home of one who had himself been a bondsman, the Fugitives found welcome and shelter. While resting an hour, before their farther flight for that land, where if a slave but touch its soil and the mightiest kingdom of the earth is pledged for his protection, the two-legged hounds had snuffed out their refuge. Their master pursued close upon their track, and one of those "$10" species of total depravity who accept Commissions for the purpose of hunting fugitives, had issued his Warrant, and a U.S. Marshal with a posse of kindred brutes fall upon the friendless negroes. Finding every hope cut off, the young mother nobly determines that she and her shall NEVER BE ENSLAVED, and resolves upon the instant death of her children and herself. One little spirit is freed––when the knife is torn from her hands––and the heroic mother, with the remaining little ones, and the husband and the old father and mother, are not thrust into an infamous prison and daily are dragged before a Court of Justice, so-called, to wait the completion of the devilish necromancy, by which they may legally be taken back to the hell from which they fled!

What a tale is this, to go forth to the world from this land of Liberty––this "model Republic." This land that sends missionaries to the "heathen." We never doubt the existence of a Supreme Governor of the universe––only when we see such deeds of depravity, and their perpetrators, escaping the thunder-bolts of Eternal Vengeance.