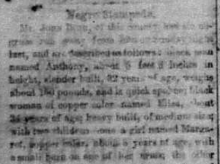 Mr. JOHN BUSH, of this county, had six negroes run away from him on Sunday night last, and are described as follows: black man named Anthony, about 5 feet 8 inches in height, slender built, 32 years of age, weighs around 150 pounds, and is quick spoken; black woman of copper color named Eliza, about 34 years of age, heavy built, of medium height, with two children, one a girl named Margaret, copper color, about 8 years of age, with a small burn on one of her arms; the other, a boy, copper color, named Lewis, about 6 years of age. A black woman named Mary, about 32 years of age, nearly the size and build of Eliza, and is some little afflicted with Rheumatism; and a black boy, son of Mary, named Daniel about 5 years of age. They were enticed away by a negro preacher of the Methodist Church named Isaac McDaniel, said McDaniel is a tall copper colored negro, and is well known in Illinois, Cincinnati, and other points in Ohio. A reward of six hundred dollars will be paid for the apprehension of the fugitives. Any information addressed to Mr. BUSH at Hannibal, Marion County, Mo., will be thankfully received by him and promptly attended to.