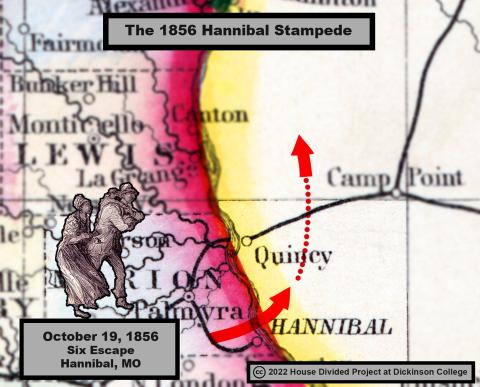 On Sunday night, October 19, 1856, a free African American preacher named Isaac McDaniel rescued from slavery his wife, Mary, their five-year-old son Daniel, and another family enslaved by Hannibal slaveholder John Bush: 32-year-old Anthony, his wife, 34-year-old Eliza, and their children, eight-year-old Margaret and six-year-old Lewis. Taking Bush's horse and carriage, McDaniel led the two families of freedom seekers out of slavery. While the fate of the group is unknown, the nearby Palmyra paper ruminated that "doubtless the whole party have made good their escape."

To view this full narrative with all of its embedded multi-media, please go to the 1856 Hannibal Stampede post at our research blog.

Late on Sunday night, October 19, Reverend Isaac McDaniel, a free and widely traveled African American preacher, stole a horse and carriage, and then “stole” his family and friends from Hannibal slaveholder John Bush. With McDaniel at the helm, the wagon carrying an enslaved man, two enslaved women, and three young enslaved children bounded out of Missouri and into Illinois. Railing against this latest “stampede,” Missouri’s proslavery presses called not for heightened surveillance of the enslaved population, but rather for even stricter control over the state’s free African American residents. As slaveholding authorities had long feared, McDaniel and other mobile free Black Missourians forged antislavery networks across state lines that helped facilitate group escapes. [1]

Initial reports from two Marion County newspapers, the Hannibal National Democrat and Palmyra Whig, described the escape as a “stampede.” The latter report was reprinted by the St. Louis Missouri Republican. Across the river in Illinois, the Quincy Whig situated the “Negro Stampede” as yet another of “those stampedes” from Marion County that had become frequent during the mid-1850s. [2]

Like other free African Americans in Missouri, Isaac McDaniel lived under the state’s repressive Black codes. Well aware that free Black communities aided freedom seekers along the Underground Railroad, slaveholders had tightened the state’s Black codes beginning in the 1830s to counteract growing antislavery sentiment in the North and mounting escapes. In 1835, Missouri legislators required free Blacks who wanted to remain in the state to register for freedom licenses with county clerks. Then in 1843, proslavery lawmakers passed even harsher legislation to “more effectually… prevent free persons of color from entering this State.” The new law forced free Blacks to post a bond ranging from $100 to $1,000 to vouch for their “good behavior,” and also provide “one or more securities,” usually in the form of white neighbors who would serve as character references and occasionally put their own money on the line. [3]

Not much is known about Isaac McDaniel, except that by the early 1850s he had obtained his freedom license and secured the trust of enough white neighbors to put up a bond for his “good behavior,” joining a small free Black community in Marion County that numbered only 76 people in 1850. McDaniel established himself as a Methodist preacher, canvasing Marion County and preaching to enslaved laborers. Importantly, as he spread the gospel, McDaniel also came into close contact with enslaved Missourians across the northeastern corner of the state. [4]

Freedom license in hand, McDaniel started traveling extensively throughout the North. Reports placed the itinerant preacher in Cincinnati and Chicago, both home to sizable free Black communities that were defying the 1850 Fugitive Slave Act and continuing to assist freedom seekers on the Underground Railroad. According to one source, McDaniel also visited Canada West (modern day Ontario), home to many freedom seekers who had fled the United States.  [5]

But McDaniel kept coming back to Missouri, despite its severe Black codes. That was because his wife, 32-year-old Mary, and their five-year-old son, Daniel, were enslaved by John Bush at his farm about four miles northwest of Hannibal, along the road to Palmyra. The 57-year-old Bush was a well-to-do slaveholder who held five people in bondage at the time of the 1850 census, including another family––32-year-old Anthony, his wife, 34-year-old Eliza, and their children, eight-year-old Margaret and six-year-old Lewis. With the addition of Isaac and Mary’s son Daniel sometime in 1850 or 1851, Bush enslaved at least six people by October 1856. Negotiating with his wife’s slaveholder, McDaniel arranged to purchase their freedom with money he had saved up during his travels. The date was set for Tuesday, October 21, when McDaniel would buy his wife and child out of slavery. [6]

The money never changed hands. McDaniel may never have intended to pay Bush, using the agreement as an excuse to keep visiting Mary and Daniel, or to forestall a potential sale to the Deep South slave markets. Or perhaps the other family Bush enslaved might have pleaded with McDaniel not to leave them behind. Either way, on Sunday night, October 19, McDaniel crept into Bush’s stable, took his horse and carriage, and helped six people exit slavery––his own wife and son, and Anthony, Eliza, and their two children, Margaret and Lewis. [7]

When slaveholder John Bush awoke to find his six enslaved people missing, he frantically offered up a reward of $600 dollars for their recapture, which he later raised to $1,000. The horse and carriage were eventually recovered, but McDaniel and the six freedom seekers were long gone. Given McDaniel’s extensive contacts in Illinois, the editor of the Palmyra Whig concluded that there was “no doubt” that the two families were well on their way to Canada. The ultimate fate of McDaniel and the two families remains unclear, though no reports exist to suggest the freedom seekers were ever recaptured. [8]

McDaniel’s involvement led many local slaveholders to conclude that the state’s oppressive Black codes were not tough enough. The Palmyra Whig decried the “great danger and extreme foolishness” of allowing free Blacks “in the disguise of preachers, to perambulate the country at will,” and urged even stricter measures to control the mobility of free Black Missourians. The focus on blaming free Blacks marked a noticeable shift from earlier efforts to explain away stampedes as the work of white Northerners. After 11 freedom seekers escaped from near Palmyra in 1853, slaveholders accused their Illinois neighbors of “enticing” enslaved people to escape and even read a white Methodist preacher out of the county because of his antislavery views. It had become slaveholders’ “usual” explanation, observed the Quincy, Illinois Whig, whenever “negroes run away from their master, in Marion county, to accuse citizens of Quincy with running them off.” [9]

But as escapes continued at a steady clip throughout the mid-1850s, Missouri slaveholders looked not just to outside actors, but placed increased scrutiny on the activities of free Blacks working to undermine slavery from within. (Just two years earlier, St. Louis police arrested another itinerant free Black preacher, Hiram Revels, for being in the state without a license. And even more recently in May 1855, authorities thwarted an attempted stampede organized by free Blacks in St. Louis.) Thomas Anderson, the local politician who in 1853 proposed that Missourians “suspend all business and intercourse” with Illinois residents, now focused his wrath on Missouri’s free African American populace, offering up a $1,000 reward of his own for the capture of Isaac McDaniel. [10] Ultimately, the 1856 Hannibal Stampede may not have resulted in the stricter Black codes local slaveholders were clamoring for, but it was part of a broader shift in the attitudes of slaveholders and authorities across Missouri, who regarded free Black populations with increasing suspicion and hostility.

Most of the details about McDaniel’s life, which are admittedly sparse, come from scattered references in reports in the Hannibal National Democrat and Palmyra Whig. Both accounts were authored by proslavery editors who had nothing but contempt for McDaniel and other free Blacks, but each provides valuable, albeit brief glimpses into McDaniel’s extensive travels and  connections across the Missouri-Illinois borderlands. [11]

There is also uncertainty about the identities of the two freedom seeking families. The Hannibal National Democrat published the names of all the freedom seekers, including two mothers, but did not specify which woman–Mary or Eliza–was married to McDaniel. It was most likely Mary, because the paper appeared to list the freedom seekers as family units, and Anthony, Eliza, and their two children were grouped together, with Mary and Daniel afterwards. Census records help corroborate some of the details about the freedom seekers, but also raise additional questions. Starting in 1850, Congress instructed census takers to record the ages and gender of enslaved people, but not to take down the names of those enslaved people, deeming their names to be “no useful information.” Based on the names and ages reported by the Hannibal National Democrat, Anthony, Eliza, and Margaret appear to be three of the five enslaved people Bush held as of the 1850 Census. At the time of the census, Eliza was likely pregnant with Lewis, and Mary pregnant with Daniel. But two other enslaved people who appear on the 1850 Census, a 20-year-old Black male and 10-year-old Black female, do not match any of the known freedom seekers, making it possible that Bush enslaved as many as eight people in 1856. [12]

To this point, scholars have not directly addressed the 1856 Hannibal Stampede. Still, Richard Blackett’s The Captive’s Quest for Freedom (2018) offers useful context by demonstrating how the subversive activities of free Black Missourians struck a nerve with slaveholders during the 1850s. Similarly, Kristen Epps’s Slavery on the Periphery (2016) highlights the centrality of slave mobility to slavery’s spread–and undoing–in western Missouri. Around the same time as slaveholders in western Missouri grew concerned about the mobility of enslaved people, enslavers in northeastern Missouri were becoming more wary of mobile free Blacks like Isaac McDaniel. [13]

[4] “Another Stampede,” Palmyra, MO Whig, October 23, 1856, [WEB]. It is unclear if McDaniel was ever enslaved or born free. The Palmyra Whig alluded to the fact that McDaniel “succeeded a few years since in getting control of his own actions,” but this appears to be in reference to obtaining a freedom license and securities to vouch for his conduct. On the free Black population of Marion County, see Seventh Census of the United States (Washington: Robert Armstrong, 1853), 655, [WEB]. Reports all agreed in their identification of McDaniel as an itinerant Methodist preacher, but besides these brief mentions no other available records shed light on his religious work. 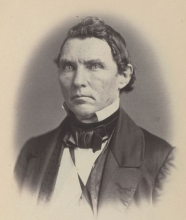 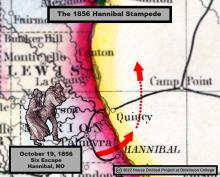