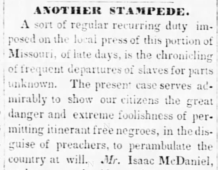 A sort of regular recurring duty imposed on the local press of this portion of Missouri, of late days, is the chronicling of frequent departures of slaves for parts unknown. The present case serves admirably to show our citizens the great danger and extreme foolishness of permitting itinerant free negroes, in the disguise of preachers, to perambulate the country at will. Mr. Isaac McDaniel, perhaps we should say, the Rev. Isaac, succeeded a few years since in getting control of his own actions, having prevailed upon a good friend or friends to become responsible for his undertakings and good behaviour. Since, he has been in the frequent habit of visiting that paradise of free love and free negroes, Chicago, and other places of the like "ilk," and indulging occasionally in a visit to Her Majesty's dominions, Canada. Isaac, we believe, performed the conditions in regard to himself, and had succeeded in some way, other than by hard work, in raising money enough to procure the freedom fo his wife. Tuesday was the day appointed for making the arrangements in regard to her, her master having agreed to let her go on reasonable terms. But Isaac had been sitting close under the sanctuary from which drops the teachings of the higher Law, and disregardless of the precepts of his book, and of the confidence reposed in him by his old neighbors and friends in Missouri, he. anticipated his undertakings, and stole not only his wife, but some four or five other slaves in the neighborhood. The woman belonged to Mr. J. BUSH, near Hannibal, and we are not informed who owned the others. He stole a horse and buggy belonging to his wife's master, which we learn has since been recovered. This happened on Sunday night; and doubtless the whole party have made good their escape. Isaac was so well known, so well posted, so much trusted, on the other side of the River, as to have everything in readiness, and no doubt is in Canada long before this. What say you, people of Marion? Shall these things continue? If so, let us make up our minds to the natural result of our own acts.