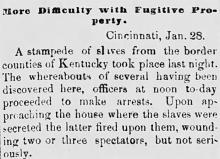 A stampede of slaves from the border counties of Kentucky took place last night. The whereabouts of several having been discovered here, officers at noon to-day proceeded to make arrests. Upon approaching the house where the slaves were secreted the latter fired upon them, wounding two or three spectators, but not seriously.

One slave woman, finding escape impossible, cut the throats of her children, killing one instantly and severely wounding two others.

Six of the fugitives were apprehended, but eight are said to have escaped.