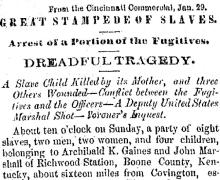 [From the Cincinnati Commercial of the 29th inst.]

Arrest of a Portion of the Fugitives.

A Slave Child Killed by its Mother, and three Others Wounded--Conflict between the Fugitives and the Officers--A Deputy United States Marshal Shot--Coroner's Inquest.

About ten o'clock on Sunday, a party of eight slaves, two men, two women, and four children, belonging to Archibald K. Gaines and John Marshall of Richwood Station, Boone county, Kentucky, about sixteen miles from Covington, escaped from their owners. Three of the party are father, mother and son, and whose names are Simon, Mary and Robert, the others are Margaret, wife of Robert, and her four children. The three first are the property of Marshall, and the others of Gaines.

They took a sleigh and two horses belonging to Mr. Marshall, and drove to the river bank, opposite the foot of Western Row, where they left them standing in the road, and crossed over to this city on the ice. They were missed a few hours after their flight, and Mr. Gaines, springing on a horse, followed in pursuit. On reaching the river shore, he learned that a resident had found the horses standing in the road as above stated, nearly dead from the hard drive that they had experienced and half frozen with the cold.

He then crossed over to this city, and after a few hours diligent inquiry, he learned that slaves were in a house about a quarter of a mile below the Mill Creek Bridge, on the River Road, occupied by a negro named Kite, a son of Joe Kite of infamous notoriety. He proceeded to the office of U.S. Commissioner Jno. L. Pendery, and, after procuring the necessary warrants, with U.S. Deputy Marshal Ellis, and a large body of assistants, went at once to the place where his fugitives were concealed. It is as well here to state that Kite had been formerly owned in the neighborhood of Richwood Station, and was purchased from bondage by his father. On reaching the house, Major Murphy, a neighbor of Gaines and who was acquainted with Kite, called on him to open the door and said that resistance would be useless. This Kite agreed he would do, but delayed so long that the officers attempted to force it open, when a window was suddenly thrown up, and one of the negro men, Robert, presented a pistol and fired. The ball wounded Mr. Patterson, a resident of the Fourth Ward, who had been deputised to assist in the arrest. He was standing in front of the window, and observing the intention of the negro, threw up his hand at the precise moment the pistol was fired. The bullet cut off one of his fingers, and then struck him in the mouth, inflicting a severe flesh wound. A second party of officers came up, and the doors were forced open, and after a short but desperate resistance the slaves were secured, but not until Robert had fired three times, but without effect. After the conflict was over a bloody and melancholy spectacle presented itself. One of the slave children was discovered lying on the floor with its head nearly severed from its body, two others, boys, aged about four and five years, were bleeding from wounds in the neck and head, and an infant in the arms of Margaret had its head much swollen and was bleeding quite freely at the nose. The officers state that Simon and Mary, the eldest of the party, made no resistance, but that Robert and Margaret fought with the ferocity of tigers, and that during the affray she struck her infant on the head with a fire shovel, in the opinion of many with the intention of taking its life.

During a conversation with Margaret, she stated to us that she was eating breakfast in company with the other fugitives, when she heard some one cry out, "They are coming, they are coming." They sprang up in alarm, but before they had time to fly, their captors burst in upon them. She fought with all the strength with which she was capable, and cannot tell how here child was killed and the others wounded, but only knows that the death and the wounding occurred during the affray. This is her story, but it is evident that the bloody tragedy was perpetrated while the officers were seeking admittance, and she is said to have acknowledged the fact of killing her child and wounding the others during the excitement incident to the arrest. The Coroner's inquest, which we give below, will throw some further light upon the subject.

The captives, as soon as arrested, were placed in express wagons, and driven rapidly to the office of the United States Marshal, on Fourth street, between Main and Walnut, followed by a large crowd of excited people. On reaching the Marshal's office, the wounds of the children were examined, when it was found that one of the children had received a flesh wound on the neck, about three inches in length, but barely penetrating the skin--the other a scalp wound, about the same length. They are but little hurt, and yesterday afternoon were playing about the Marshal's office, apparently unconcerned. On questioning the little fellows, they said that some one in the house threw them down and tried to kill them, but they either did not know, or would not reveal who it was. The slaves, on reaching the Marshal's office, seated themselves around the stove with dejected countenances, and preserved a moody countenance, answering all questions propounded to them in monosyllables, or refusing to answer them at all. Simon is apparently about fifty-five years of age, and Mary about fifty. The son of Mr. Marshall is here, in order, if possible, to recover the property of his father.

Robert is a very young man about twenty-two years old, of a very little and active form, and rather a mild and pleasant countenance; he is spoken of by his owner as being an excellent servant. Margaret is a dark mulatto, apparently about the same age with her husband; her countenance is far from being vicious, and her senses, yesterday, appeared partially stultified by the exciting trials she had endured. After remaining about two hours at the Marshal's office, Commissioner Pendery announced that the slaves would be removed to the custody of the United States Marshal until 9 o'clock this morning, when they would come up for examination.

The slaves were then taken down stairs to the street door, when a wild and exciting scene presented itself--the sidewalks and the middle of the streets were thronged with people, and a couple of coaches were at the door in order to convey the captives to the Station-house. The slaves were guarded by a strong posse of officers, and as they made their appearance on the street, it was evident that there was a strong sympathy in their favor.

When they were led to the carriage doors, there were loud cries of "drive on," "don't take them." The coachman, either from alarm, or from a sympathetic feeling, put the whip to their horses and drove rapidly off, leaving the officers with their fugitives on the sidewalk. They started on foot with their charge, to the Hammond street Station-house, which they reached in safety, and secured the prisoners for the night, although followed by a very large crowd of whites and blacks.

The slaves claimed that they have all been on the other side of the river, and frequently by the consent of their masters.

About 3 o'clock, application was made to Judge Burgoyne for a writ of Habeas Corpus, to bring the slaves before him. This was put in the hands of Deputy Sheriff Buckingham to serve, who, accompanied by several assistants, proceeded to Hammond Street Station-house, where the slaves were lodged. Some time was spent in waiting for the arrival of Mr. Bennett, Deputy U.S. Marshal. When he arrived he was unwilling to give them up, and a long time was spent parleying between the Marshal and the Sheriff's officers. The Sheriff being determined that the writ should be executed, Mr. Bennett went out to take counsel with his friends. Finally, through the advice of Mayor Faran, Mr. Bennett agreed to lodge the slaves in the jail, ready to be taken out at the order of Judge Burgoyne. Judge Burgoyne, having to be absent from the city to-day, will not hear the case until Wednesday morning.

At the Station House, Lieutenant Hazen showed his disposition to favor the slaveholder, by driving out of the room the gentleman who had sworn out the affidavits before Judge Burgoyne, and who had accompanied the Sheriff to point out the persons named in the writ, altho' he let Mr. Gaines, the slave claimant, come in at pleasure. Mr. Getchell, counsel for the slaves, remonstrated with him in regard to his course, and upon threats being made to report the case to Mayor Faran, he knocked under and allowed the gentleman to remain.

Several witnesses were examined before the Coroner. Their statements correspond mainly with the above details of the tragedy.