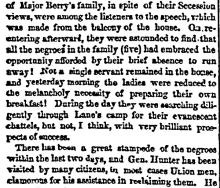 ...There has been a general stampede of the negroes within the last two days, and Gen. Hunter has been visited by many citizens, in most cases Union men, clamorous for his assistance in reclaiming them. He gives them written permission to search through all the camps, and take their slaves if they can find them; but I have not yet heard of an instance in which one has been found....

[Editor's Note:  The majority of this article has been omitted from our transcription except for the portions directly mentioning the term "slave stampedes" or some variant.]