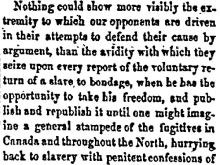 GOING BACK TO SLAVERY.

Nothing could show more visibly the extremity to which our opponents are driven in their attempts to defend their cause by argument than the avidity with which they seize upon every report of the voluntary return of a slave to bondage, when he has the opportunity to take his freedom, and publish and republish it until one might imagine a general stampede of the fugitives in Canada and throughout the North, hurrying back to slavery with penitent confessions of their folly and ingratitude and prayers to be again received into favor. Their object in thus magnifying a few very rare and exceptional cases into a general rule is as fraudulent as the attempt is imbecile. They evidently expect the people of the North to be green and stupid enough to accept their statements and inferences without question or doubt, and to believe that their slaves are so enamored of the lash, the dungeon, the paddle, the auction stand, and their peck of corn a week, that they pine for them like home-sick children, when they are deprived of these Patriarchal privileges for a short time. They would have us believe that their slaves are so happy, that not all the wiles and machination of the abolitionists could deter them from returning, if they were foolish and thoughtless enough to leave their kind and happy homes for the dreary life of freedom.

Some weeks ago a slave was brought to this city by his master from Georgia, and when by accident he found that he was legally entitled to his freedom, he showed the most eager desire to secure it. He came to some well-known abolitionists and brought them to interfere in his behalf; accordingly a writ of habeas corpus was served on the master, and the man's freedom affirmed by the Court. After this it is said the colored man voluntarily went back to his master and asked to be taken as a slave. Whether he had left a wife, children,parents or loved ones in slavery to whom his heart drew him by cords of love, or what fair or false promises were made him by his master, what fascinating hopes were placed before him to dazzle his childish fancy, and take captive his enfeebled mind, we are not told, nor is any explanation of the facts given; but we are expected to infer that he was led to this extraordinary course by a pure love of slavery and dread of Freedom. Those who can accept such a conclusion, are welcome to do so. We do not believe there is a slaveholder in the South who seriously accepts it. But it serves their purpose to ring the changes of their glorification of slavery upon such a fact, and so we hear it repeated, and reiterated almost without end, from the Potomac to the Rio Grande.

The Kentucky papers are exulting over similar evidence of the attractiveness of slavery. They state that two slaves, a man and his wife, formerly held by the Hon. R.H. Stanton, having been "enticed" to run away and go to Canada, have written back expressing "a warm desire to return home," as they have found that they "have to work harder and fare worse than in slave Kentucky." But though this letter was reported some weeks ago, we have not heard of the return of these penitents to the arms of their master; though it strikes us that the tale would have been more significant if it had included the actual return of the slaves.

These pro-slavery editors have entered upon a dreary and barren labor in this effort at argument. Extracting heat from moonshine, or oil from sandstone would be pastime compared with it. To say nothing of the doubtful character of the majority of their facts, but counting as true every rumor of such a case, the whole South, with its four million of slaves, would not furnish ten cases in a year; less by far than the annual number of suicides by slaves to escape their hopeless doom. But suppose those cases were multiple by hundreds, would they not prove the monstrous wickedness of that system which could so debase the human soul that it could prefer slavery to freedom? Drunkards reformed or attempting to escape the snare of the rumseller, return to a worse degradation than they rose from: the history of modern Magdalen Societies and Rosine Associations is saddened by instances of women once rescued from a life of pollution, and surrounded by comforts, breaking away from the restraints of virtue and rushing back to the lowest depths of vice. Does this prove drunkenness, profligacy and the foulest defilement better than temperance, purity and self-denying virtue? Because so many men love indolent and luxurious self-indulgence better than a life of moderation, hardy self-culture and manly toil, is the former proved to be more desirable than the latter? Is the self-immolation of Hindoo widows, or the devotees of Juggernaut, or the voluntary penance of monks and nuns, proof of the divinity of their faith, or the superior excellence of their life over that of the men who find their happiness in doing good to their fellow-men? We have occasional instances of discharged convicts returning and begging for the privilege of perpetual imprisonment, but we have heard no pompous logician agree therefrom the superior happiness of imprisonment over freedom. The emancipated Israelites longed for Egypt's fleshpots, in their hunger and hardships. Who infers thence that Pharoah's away was "mild and paternal," and a lot of his bondmen happier than that of freedom?

But this is wasting words. The slaveholders know that their slaves long for freedom and only the severest and most vigilant policy can repress that longing. They publish this knowledge in Fugitive laws, in their rewards for, and pursuit of runaways, in all their inhuman statutes, in their provisions for self-defense, and all their attempts to stifle free thought and speech in their midst and to put down agitation and "crush out abolitionists" at the North. Do they suppose the people of the North so stupid, so idiotic, that they cannot read the meaning of their alarm at free though, and that watchfulness to suppress all intelligence and sense of manhood among their slaves?

Gullible and credulous as self-interest makes men, and wilfully blind as are multitudes to the requirements of duty, we are not quite willing to believe the American people so devoid of common sense and intelligence as the supposition would make them. If they are emulous of that reputation, they can win it by avowing their acceptance of the pro-slavery logic we have been considering.