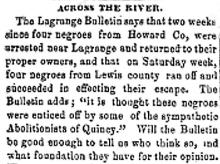 The Lagrange Bulletin says that two weeks since four negroes from Howard Co., were arrested near Lagrange and returned to their property owners, and that on Saturday week, four negroes from Lewis county ran off and succeeded in effecting their escape. The Bulletin adds; "it is thought these negroes were enticed off by some of the sympathetic Abolitionists of Quincy." Will the Bulletin be good enough to tell us who think so, and what foundation they have for their opinion. We are getting a little tired of this disposition of our Missouri friends to lose their equilibrium, and charge that every slave stampede that takes place originates in this city. If this course is to be continued we shall come to the conclusion that local feeling and commercial rivalry has much more to do with the matter than any love for the truth or desire to do justice. We regret to say that recent articles have appeared in a Quincy paper charging that there are citizens of Quincy who entice slaves from Missouri, but we know that there is no foundation for the charge. We are fully satisfied that for years past no case of interference with the slave property of Missourians has originated in Quincy, and we believe that four fifths of those who are so ready to get up an excitement on the other side of the river, against Quincy, know that they are wrong. At any rate, they ought to know it.

We take the following from the same number of the Bulletin.

Cassius M. Clay, the renegade Kentuckian, a demagogue, desparado and foul mouthed abolitionist, made a speech in Quincy on Wednesday, and the result will be that if the slave owners up this way don't keep a sharp look out, they will have ALL their negroes stolen from them. Again we say, look out for your benevolent neighbors over in Suckerdom! Cash Clay is now traveling through that State, delivering incendiary speeches and exciting negro stealers. In a few days, the whole of North-East Missouri will be flooded with abolition emissaries and underground railroad operators.

This will undoubtedly amuse those of our citizens who heard Mr. Clay's address--the address that the Bulletin says was an incendiary one, and calculated to "excite negro stealers." The citizens of North East Missouri will please keep a "sharp look out" for those "abolition emissaries and underground railroad operators." They will not be troubled with them, but it will do no hurt to keep one eye open all the time. We can stand a little humbug once in a while, but the specimen from the Bulletin is entirely too rich. We call the editors attention to a short account of the latest "underground railroad affair" in this neighborhood, which will be found in another column.