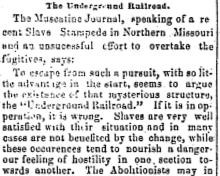 The Muscatine Journal, speaking of a recent Slave Stampede in Northern Missouri and an unsuccessful effort to overtake the fugitives, says:

To escape from such a pursuit with so little advantage in the start, seems to urge the existence of that mysterious structure, the "Underground Railroad." If it is in operation, it is wrong. Slaves are very well satifised with their situation and in many cases are nor benefited by the change, while these occurrences tend to nourish a dangerous feeling of hostility in one section towards another. The Abolitionists may in this way procure the freedom of some negroes, but they cause the masters of many more to sell them into worse slavery, farther South. All the slaves in the neighborhoods whence these negroes escaped are supposed to have known of the matter beforehand, and will be encouraged by the result.

This supposition will create a panic among slaveholders, and the first "nigger trader" that comes along can pick up plenty of first rate bargains; and thus many a poor darkey will "go down de riber" who might have continued to remain in comparative comfort in the place of his birth.