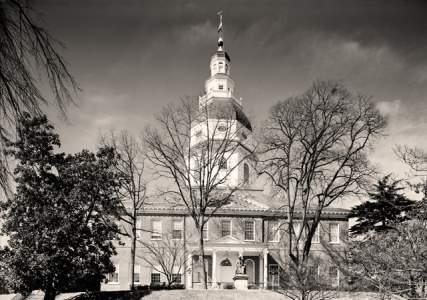 ANNAPOLIS CITY, capital of Maryland, and seat of justice of Anne Arundel county, is situated on the south west bank of Severn river, three miles from its entrance into Chesapeake bay, 20 miles southeast of Baltimore, and 40 miles from Washington. Though located favorably enough for commerce, on a good harbor, the tide of trade and prosperity is drawn too strongly toward Baltimore to allow it to flourish as vigorously as it otherwise might. The site and plan of the city are pleasant and agreeable. The statehouse is venerable and interesting from its Revolutionary associations. Here, in 1783, Washington resigned his commisssion to the continental congress, one month after the departure of the enemy from the American shores. The walls of the senate-chamber are honored with the portraits of Carroll, Chase, Paca, and Stone, signers of the Declaration of Independence, and of other distinguished contemporaries. In the hall of the house of delegates, is a picture of the surrender of Cornwallis at Yorktown. Aside from these attractions, the capitol is beautiful for its situation and architecture, as well as the magnificent prospect viewed from its dome. Besides several churches, banks, &c., Annapolis contains St. John's college. The population in 1810, was about 2,000; in 1820, 2,260; in 1830, 2,623; in 1840, 2,792; in 1850, 3011.