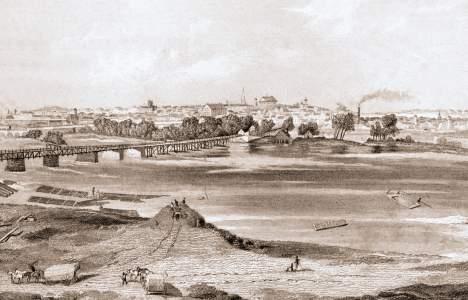 From its peculiarly-favorable situation, between the upper and the lower country, Richmond is one of the most healthy cities in the United States. Seldom, if ever, has it been visited with yellow fever, or any desolating epidemic. The city is divided into two unequal parts by a valley, through which passes the Shockoe Creek, to enter James River. It is chiefly built upon the more elevated grounds on either side of this depression, which present a beautiful variety of surface, and afford in many parts highly picturesque situations for dwellings and for public edifices. Shockoe Hill, on the W. part of the city, and Richmond Hill stand opposite to each other, with the creek between them ; and near the eastern limit is Church Hill, which is also a commanding eminence. Over these elevated grounds, and the valley between them, declining towards the river, the streets and buildings of the city are spread. The streets mostly cross each other at right angles, and are most commonly 65 feet in width. The city was laid out to contain about 3 square miles, much of which is not yet built up. As built, it covers an area about 3 miles long and three fourths of a mile wide. The city contains from 1500 to 2000 dwellings, something more than half of which are of brick, and the remainder of wood. Near the brow of Shockoe Hill, which is an elevated plain, and a favorite place of residence, is Capitol Square, a beautiful public ground, containing about 9 acres, surrounded by a handsome iron railing, ornamented with gravel walks, and shaded with a variety of trees. In the centre stands the State House, which has excited the admiration of travelers for its commanding position, and its chaste yet beautiful proportions. It was constructed after a model brought by Mr. Jefferson from Nimes, in France. It has a portico in front, with an entablature supported by lofty Ionic columns of fine proportions and imposing appearance. In an open hall, in the centre of the building within, is placed a marble statue of Washington, by Houdon, a French artist, which was erected in 1788, during the lifetime of Washington. The following is the inscription on its pedestal, from the pen of Mr. Madison : “The General Assembly of the commonwealth of Virginia have caused this statue to be erected, as a monument of affection and gratitude to -George Washington, who, uniting to the endowments of the hero the virtues of the patriot, and exerting both in establishing the liberties of his country, has rendered his name dear to his ,fellow-cititzens, and given the world an example of true glory.”

Contiguous to the State House is the City Hall, an elegant and costly edifice of Grecian architecture, having a portico with 4 Doric columns at each end, containing accommodations for the city courts, the common council, and various offices. The penitentiary, in the western suburbs of the city, is an immense building, surrounding a hollow square, 300 feet long and 110 feet broad. Several acres of ground enclosed, besides, are connected with it. The armory is another large edifice, 320 feet long and 280 feet wide. The almshouse, in the northern suburb of the city, has also a spacious edifice well adapted to its purpose. Among the charitable institutions of the city is a Female Orphan Asylum, supported partly by funds of the corporation, and partly by private munificence. There is likewise a public school for the education of poor children of both sexes, with a convenient edifice, which is under the superintendence of trustees appointed by the city council, and is sustained by annual appropriations from the literary fund of the state, and from the treasury of the city. Among the public institutions is the Virginia Historical and Philosophical Society, founded in 1831, and since incorporated.

Richmond contains from 16 to 20 churches of the various denominations; among which are 3 Episcopal, 2 Presbyterian, 3 Methodist, 3 Baptist, a Unitarian, a Campbellite, a Friends, a Roman Catholic, and a Jews' Synagogue. Some of these have large and elegant edifices. The Monumental Episcopal Church stands upon the site formerly occupied by the old Richmond Theatre, which was destroyed by fire during a performance, involving the destruction of many valuable lives, among which was that of the governor of the state, George William Smith. On the monument on its W. side is the following inscription: “In memory of the awful calamity that, by the providence of God, fell on the city on the night of the 26th of December, in the year of Christ 1811, whereby, in the sudden and dreadful conflagration of the Richmond Theatre, many citizens of different ages and both sexes, distinguished for talents and for virtues, respected and beloved, perished in the flames, and in one short moment public joy and private happiness were changed into universal lamentation, this monument is erected, and the adjoining church dedicated to the worship of Almighty God: that, in all future times, the remembrance of this mournful event on the spot where it happened, and where the remains of the sufferers are deposited in one urn, may be united with acts of penitence and devotion. Above 60 killed and many others maimed.” There is now one theatre in Richmond, but it is said not to be extensively patronized.

Among the most splendid and useful of the public works of the city are its waterworks, commenced in 1830, and completed at an expense of about $120,000. By 2 forcing pumps, worked by water power, 800,000 gallons of water, in 24 hours, are lifted from James River into 3 reservoirs containing 1,000,000 gallons each, from which it is distributed over the city in pipes, and at convenient points along these pipes are hydrants for the supply of the fire department.

Richmond is about 150 miles from the mouth of James River by the course of the channel, and 50 OF 60 above City Point, where the Appomattox empties into the James River. Vessels drawing 14 feet of water can come up to the bar 5 or 6 miles below the city, and those drawing not more than 10 feet come to its wharves at the ordinary tides. The tide rises at Richmond 4 feet. The channel of the river is winding, which, with the distance from the ocean, is a considerable impediment to navigation. Several steamboats are employed in towing vessels to and from City Point. About 100 vessels visit the port during the year. A line of 5 schooners sails once a week to Petersburg, and another line, of the same number, once a week for New York. 3 steamboats form a line for passengers to Norfolk; and 2 steampackets a line to Baltimore. The principal exports from Richmond are flour, tobacco, and coal, the annual value of which is between six and seven millions. A canal has been constructed from Richmond to Lynchburg, and beyond that place. It was first constructed to pass the falls in James River in 1794, and afterwards, in 1835, extended to Lynchburg. A railroad passes through Richmond from Fredericksburg to Petersburg, and thence to Weldon on the Roanoke River, where it connects with other southern railroads. It crosses James River, at Richmond, on a high bridge constructed for the purpose. The most important interest of Richmond, however, is comprised in its manufactures. In the falls, on the James River, extending about 6 miles, it possesses an immense water power, which, although largely improved, is capable of furnishing much greater advantages still to future enterprise. Upon these falls have been erected very extensive flouring mills, iron works of various descriptions, and a very large cotton factory.